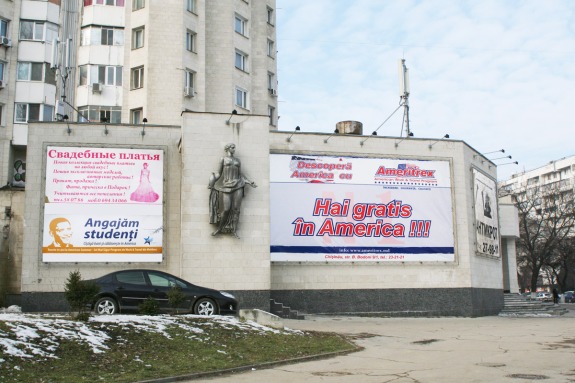 If there is something my eyes could hardly avoid when I came to Chisinau six months ago, is the massive presence of advertisement all over the city. Coming from a country with a historical suspicion towards adverts and ad people, I can say that I never been more bothered by it in any place than in Chisinau. Though it seems absurd to me if I remember my previous trips in London, Bucharest, Berlin or Casablanca; which are probably as much polluted by ads and commercial billboards as Chisinau can be. But Chisinau is small compared to those cities and therefore, it’s even harder to avoid it. I can still remember my feeling of dizziness first time walking on overcrowded rush hour Stefan cel Mare, getting confused by such a mix and piling up of colours, brands and slogans. The mixture is even stranger to me when I stop at the cross of Pushkin Street and I see Mc Donald’s billboard on left side and “Chisinau Blonda” on the right side. What’s the message? Be patriotic and drink Chisinau beers but feed foreign investors and eat Mc Donald’s hamburgers? Mmm, to bad for Mamaliga… Not only it’s there to remind you how to spend your money but it also attacks you, punches you right in the corner of your face. Actually I really had a hard time to adjust myself to that. It was six months ago and I remember. Even though I adjusted my sight and learned to see the good things but processing it, I still feel strange about it. I even talked about it with some other foreigners and they didn’t feel as shocked as I was. Finally it makes me wander “I am not too bloody French?” It looks like all this anti-ads thinking and the legislation developed in France since 1881 which put hard restrictions on public sticking in public space got under my skin. Though it’s not my intention to turn it into a national matters because as far as I know aggressive advertising didn’t spare France anyway. Even if my point is not to write a pamphlet again advertising and consumerism if think there is a interesting point of comparison in the way advertisement is used on buildings belonging to cultural institution and historic buildings in Europe. I think what you put on the front side of your national museum or Opera house is revealing one’s nation feelings toward its cultural heritage.

For instance, advertising says something about how Culture is treated in Moldova. I remember my confusion when I passed by the front side of Eminescu Theatre the first time and I saw those two big banners for bank and credit hung on each side of the wall. Same thing when I went to Brancusi gallery; you cannot miss the billboards hung up all along the wall, actually advertising everything except culture. At first, I really wandered what was the link between an art gallery and Samsung or a Theater and bank credit… Not that I’m stupid and I didn’t get that the theatre and the gallery where actually sponsored by those companies, it just didn’t cross my mind that it was conceivable to mix two things with such a different purpose and supposed to promote such different values… Of course there is nothing new about this… It is a current tendency of museums and cultural institutions all around Europe to “decorate” their facades with advertising banners. In Paris, the Musée d’Orsay and the Palais Garnier opera house used to host last year such prestigious brands as Chanel, Yves Saint-Laurent, Ralph Lauren, Air France and H&M on their walls. No matter the country – France, Italy or Moldova – I remain chocked and I still see it somehow like a pornographic demonstration of the power of money. Though I find a difference between the kinds of ads you can find in Western Europe and the ones you find in Moldova. I don’t even know if I’m able to qualify this difference but let’s put it like this… On the Musée d’Orsay wall Chanel or Yves Saint Laurent delights your sight and on Eminescu theatre Moldinconbank delights your sight… Not that Chanel has more to do with art and culture than Moldincombank or Samsung but, whether you like it or not, by what you put on your wall you attach a certain image to your institution; and the other way round. A brand is giving a certain image of itself by being on the front side of a museum. Maybe it’s only my point of view and for sure I’m not very aware about Moldovan cultural consumers’ behaviour but I think that Eminescu theatre is not really improving its image by having MDBank on its front side. Actually I would even say that it makes its prestige fade away. I mean any kind of ad would have this effect and don’t misunderstand me, I’m not saying that I prefer to see Channel than Moldindconbank but my point of view is that cultural institutions are in a way representing a piece of national pride and therefore the best should be done to preserve it. Yes, I think national pride is more endangered by an ad for bank and credit than an ad for perfume… I know it sound silly but all of this is question of image let’s say… I do realize that this kind of practice, in general, is the only answer left to those institution when public budgets for Culture are shrinking more and more all over Europe or in the case of Moldova, are not yet able to support these costs. Sponsoring is not an evil thing by itself and injection of private money in culture is nowadays necessary, but I just think advertisement should stay at its right place when it comes to cultural matter. I talked bellow about pornography because it shows you more than you want to see. I think it’s exactly the same thing here. You know that Moldinconbank is sponsoring Eminescu theatre, but do you need to be remembered every time you pass by a three meters high banner? 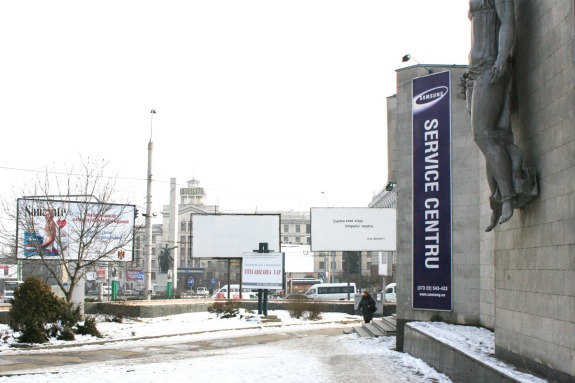 Which one should serve the other? Isn’t it money that should help culture to develop and not the other way? Because when I pass in front of Eminescu, I don’t have the feeling that a big bank is helping a Theater but more that a theatre is helping a big bank to make even more money because it has no other choice… Not only it damages Moldovan cultural heritage but those pictures also deprive us from our freedom. I tend to think that democracy is affected by such practices precisely because this bombing of images is imposed to people. You have no choice to say ‘yes’ or ‘no’, no power of decision about what you’d like to see… Money decides everything: whether or not this theatre should work; whether or not this historical building should be preserved… How many historical monuments have been destroyed so far in Chisinau to be replaced by business places like banks or shops? Those choices should be a burden of the political power and not being left to the will of money-owners. I may deviate a little bit of my initial focus on adverts by taking this example of demolished monuments but I think it leads to the same conclusion: preservation of cultural heritage, which means securing it from degradation and demolitions – shouldn’t be left so much in the hands of grid private investors for whom culture is not more than another good for sale.

Cultural policy, whatever the financial condition of the country are, should be the result of common and balanced decisions of politics and civil society; otherwise, huge is the risk of reducing even more the place available for public expression and therefore dwindle the chance for Moldova to build a common future and its national identity.